Blockchain and Cybersecurity- an Islamic Perspective

The high level of dependency on the internet and the significant increase of exposure of critical parts of our lives — social media platforms, smart TVs, fitness wearables, electronics health records, e-government services — have resulted in the creation of new opportunities for hackers to exploit. Unfortunately, the business opportunities for cybercrime might be considered lucrative as it is estimated at US$2 trillion a year. Computer-related crime has become a growing phenomenon that involves traditional criminal activities such as ransomware, spam, theft, fraud, forgery and mischief. What is really threatening is that younger people, Muslims included, are involved in such crimes and that people in general would not hesitate to use the internet to commit different types of crimes ranging from online gambling to using pirated software, pirated songs and pornography. DR HUSAM YAGHI writes.

With the growing security threats to critical infrastructures, personal data, corporates, government and the military, the US Pentagon published on the 12th July 2019 in its report titled ‘DOD-Digital-Modernization-Strategy-2019’ a section on its intent to experiment with the use of blockchain to shield all data centers, networks, communication and data.

Blockchain is a perfect technology for the protection of data from hackers, prevention of fraud and protection against data theft. That is because data managed by a blockchain application is secured through advanced cryptography and users can be distributed all over the world. Any attempt to alter authenticated data is flagged by other users on the network and the larger the network, the more hardened is the security.

However, one should know that no system can ever guarantee security and integrity, though decentralized blockchains are the closest we have come. Blockchain is a distributed technology that stores data on multiple computers rather than a centralized structure where all the information is stored in very large databases. The data pertaining to each batch of valid transactions is stored within its own block; every block is connected to the block which is situated in the position before it and grows continuously as new blocks of information are appended. Blockchain resolves the ‘lack of trust’ problem between counterparties at a very basic level while guaranteeing the integrity and availability of data.

Cybersecurity is the protection of information assets, ie computer hardware, software, data, user accounts and prevention of disruption or misdirection of technology services. In Islam, information is viewed as a very important and valuable asset.

In the Muslim world, the number of Muslim professionals working in the information technology industry is significantly increasing. Some of these professionals are specialists in security and have access to sensitive information as part of their role. Unfortunately, the Islamic view regarding this domain and what could be considered unethical may not be clear to some.

There is no doubt that Prophet Muhammad was sent to complement morals and ethics of all religions. Islamic ethics inspire people to obey ethics in all dealings in life. Good objectives do not justify bad means. Islamic ethics derived from the Quran and the Prophet’s sayings repeatedly discouraged the various forms of unethical behavior. Let us take a look at a couple of examples:

• Quran [24:27]: “O you who have believed, do not enter houses other than your own houses until you ascertain welcome and greet their inhabitants. That is best for you; perhaps you will be reminded.” The consent of the owner of an asset is required before use by others.

• Quran [49:12]: “O you who have believed, avoid much [negative] assumption. Indeed, some assumption is sin. And do not spy or backbite each other. Would one of you like to eat the flesh of his brother when dead? You would detest it. And fear Allah; indeed, Allah is Accepting of repentance and Merciful.” Spying is forbidden no matter the circumstances.

By the nature of their work, cybersecurity ethical hacking professionals have access to advanced tools and sensitive user or corporate data. The misuse of such privileges is prohibited according to Quran [3:104]: “And let there be [arising] from you a nation inviting to [all that is] good, enjoining what is right and forbidding what is wrong, and those will be the successful.”

Plagiarism, piracy and misquotation are all nothing but theft and deception. Quran [4:29] states: “O you who have believed, do not consume one another’s wealth unjustly but only [in lawful] business by mutual consent. And do not kill yourselves [or one another]. Indeed, Allah is to you ever Merciful.” These activities are strictly prohibited.

Blockchain could be used to enforce the rules set out in the Quran, while the remarkable levels of transparency it offers could help better identify and mitigate cyber threats without discrimination. Since information is treated as an asset, any handling of assets outside the defined perimeters and conditions managed by a blockchain smart contract would be flagged.

In conclusion, a lot still needs to be done about the security measures to be taken when handling digital assets to counter the exponential growth of cyber threats to all the devices we depend on from heart pacemakers, fitness devices, smart homes and digital identities to mobile banking.

Dr Husam Yaghi is an advisory board member at BlocMint. He can be contacted at hyaghi@gmail.com. 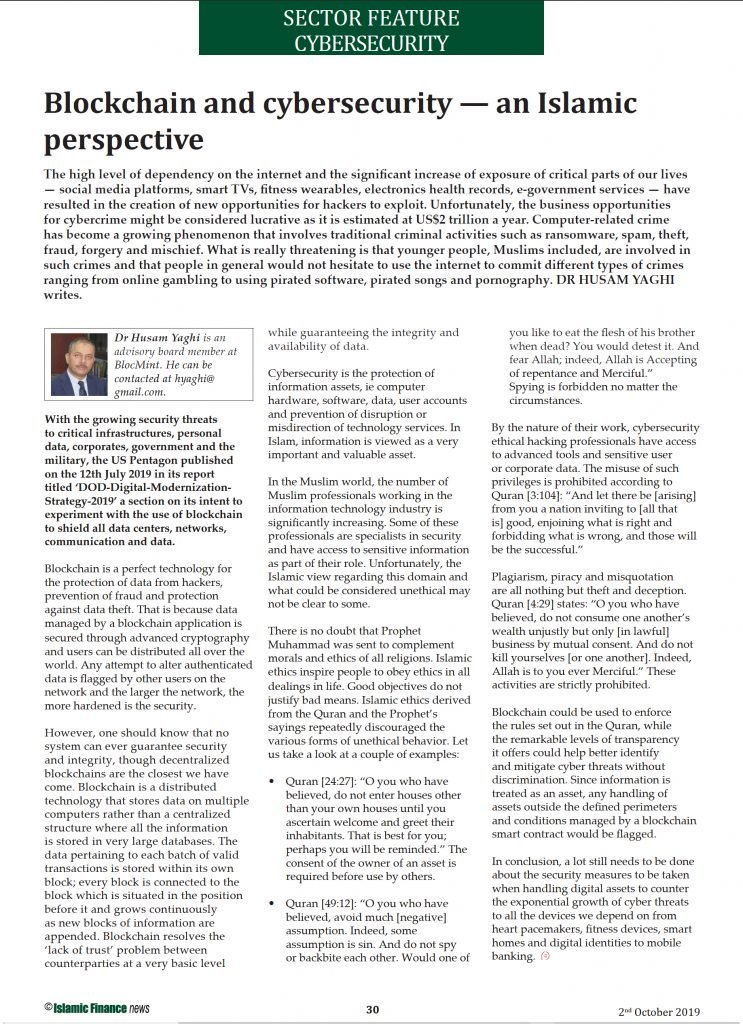